United Nations
Harlan's World was a habitable planet, approximately eighty light-years[1] from Earth. It hosted three moons and a series of orbital platforms known colloquially as the Angels. It was originally founded by Founders and settled by the remnants of a Japanese keiretsu using East European labor. Harlan's World was an ethnic mix of primarily Slavic and Japanese, and was governed by the Harlan family even though it's under the scope of Protectorate.

The world is small for a habitable planet, and its seas, that cover roughly 90% of the planet, slop about unpredictably under the influence of the three moons. The majority of the landmass on the world comprises island chains and archipelagos, the largest of which is the Millsport Archipelago, followed by Kossuth and then New Hokkaido. A year on Harlan's World is longer than a year on Earth.

Originally colonized by an expedition led by Founders and Konrad Harlan, whose family would become the leading aristocracy of the planet. Over time, the city of Millsport would become the planetary capital. The planet's economy was dependent on the mining of the metal used for Cortical Stacks. Harlan's World eventually fell into a massive planetary war known as the Unsettlement, led by Quellcrist Falconer and her Uprising. 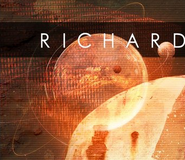 A view of Stronghold

A Martian, an original inhabitant of Harlan's World