View source
watch 02:08
Who is Reileen Kawahara?
Do you like this video?
Play Sound

"Bury Me Dead" (During Flashbacks)
Reileen Kawahara was the sister of Takeshi Kovacs. Originally believed to have died in 2130, Relieen was revealed to have survived and became one of the most powerful meths to ever exist. She was later killed by Takeshi Kovacs in an effort to end her reign of terror.

Under the alias of Gena, she was a CTAC detective who tried to capture The Yakuza's tattoo artist Holly Togram for her investigation. Reileen was interrupted by Takeshi Kovacs who was under the alias of Ken. When they were attacked by Tech Ninjas, Ken, Holly, Gena and several CTAC soldiers had to work together.[1]

Reileen was born on Harlan's World and is of mixed Japanese and Hungarian descent. She has one older brother, Takeshi Kovacs. Although she doesn't share her older brother's last name, her father is shown in flashbacks to be a white male so it's safe to assume that while Takeshi took his father's name, Reileen would have taken her mother's, as their mother was of Asian descent from her family photo she shows to Takeshi. Rei and her brother grew very close living under their abusive father, often exploring the planet's wilderness together and telling scary stories like the Patchwork Man. Eventually, following the death of their mother, Takeshi was forced to kill their father after he threatened to harm Rei. Taken into custody, Takeshi joined the Colonial Tactical Assault Corps in the belief that his sister would be taken care of. Instead, Reileen was sold to the Yakuza and became one of their enforcers. During a CTAC raid, Reileen met Takeshi for the first time in ten years. During the reunion, CTAC officers tried to kill Rei, prompting Takeshi to turn on them to protect his sister. Reileen did the same for Takeshi, turning on her Yakuza masters.

Now fugitives from both factions, Rei and Takeshi fled to the wilds of Harlan's World, falling in with Quellcrist Falconer and her Envoys. While Takeshi became dedicated to the cause, Reileen was less enthusiastic. Out of jealousy for Quell, Rei ultimately betrayed the rebels to the Protectorate and turned on Quell herself during the escape, destroying their shuttle with an orbital laser strike. Though presumed dead, Rei had actually managed to survive the explosion, using her new wealth to become one of the most powerful meths by 2384.

Using the newfound wealth provided to her from the Protectorate in exchange for betraying the Envoys, she tried to find Takeshi; however, by the time she located him, he has been captured by Jaeger and imprisoned.

By the 2380s, she has become a powerful crime lord, employing both Mister Leung and Dimitri Kadmin (both him and his clone). Hiding her true identity behind a series of sleeves, Rei presented herself as Hemingway to her employees and as the high-profile Meth, Clarissa Severin, to other Meths. She also established an uneasy alliance with Tanaka, a captain in the Bay City Police Department, bribing him into informing her of any police activity and ensuring he keeps quiet about anything.

She established Head in the Clouds, a massive floating fortress that serves as her base of operations, where she also lives, turning it into a high-end brothel catering to Meths and other members of high society, which allows them to perform anything on any prostitute as they so desire, regardless of age, sex and race (it was mentioned they also have children sleeves on board).

She has recruited young, desperate women off the streets and provided them with jobs and places to stay in the Clouds. However, she secretly implanted religious coding on all the Stacks of all her prostitutes, so, in the event of sleeve death, their stacks cannot be allowed to be reactivated for questioning. She also established the Wei Clinic, a clinic in which the victims are tortured in VR using questionable methods in order to drive them insane.

When Miriam Bancroft brutally beat up Lizzie Elliot, due to Laurens impregnating her during their liaison in Jack It Off, Oumou Prescott, acting as a middleman between Rei and Miriam, secretly contacted Rei and requested for Lizzie to be eliminated. Rei had Lizzie abducted and tortured at the Wei Clinic, leaving Lizzie traumatized.

After Proposition 653 was announced by the Protectorate, which would allow victims of murder to be spun up for questioning regardless of their religious coding, Rei saw it as a threat to her empire, and took action; To repay back her debt to Rei, Miriam laced her lips with Stallion and infected Laurens by kissing him upon his return from Osaka. He later arrived at Head in the Clouds, and, influenced by Stallion, engaged in rough intercourse with a prostitute, and accidentally killed her in an adrenaline rush by snapping her neck, destroying her stack. The other prostitute, Mary Lou Henchy, scared by Laurens, tried to flee but was pursued by Rei herself, who hunted her before cornering her on the roof. Henchy decided to commit suicide via jumping in hopes that she would be recovered and spun up back for questioning, unaware that she has been religiously coded.

Afterward, she blackmailed Laurens to use his UN contacts to delay and cancel Proposition 653. However, out of shame and unable to deal with the blackmail and the horror, he decides to shoot himself through his stack a few minutes before his backup in order to forget the events.

When Laurens is brought back again, he, unable to believe that he killed himself, relentlessly seeks his murderer. Rei, seeing a perfect opportunity to free her brother from prison, approaches Laurens (as Clarissa) and, playing on his love of history and studying about Quellcrist and Envoys, convinces him to influence the UN to release Kovacs, as he would have been the best shot in finding out who killed him.

Meanwhile, a Bay City detective, Elias Ryker, who, coincidentally, was also a childhood friend of Mary Lou Henchy, relentlessly investigates her death and brutally interrogates Leonid Kye Harris, a CTAC senior sys op who handled religious coding, due to his belief that she was coded against her knowledge. After hearing this and realizing that Harris could be compromised, she has Dimi 2 kill Harris and frames Ryker for the murder to tie up any loose ends.

Gena was part of UN's CTAC and after Holly Togram, who was with Takeshi under the alias Ken. They got attacked by ninjas, who took out Gena's unit, but Gena and Takeshi manages to defeat them all.

They went into Mizumoto syndicate headquarters, the Wild Geese, where Gena continues her investigation on the coup by Shinji. She overhears Takeshi singing a song and realizes this was her brother, but decides to not reveal herself. She tries to convince him to drop the job and not risk his life, but he insists on finishing it.

Gena find information about Holly's parents and that their stacks are owned by Mizumoto syndicate. Upon learning that, during the succession ceremony, Holly tries to kill Genzo, who actually was the Founder of the syndicate and was transferring to new body on each succession. While the Founder was in an enhanced armor, Gena and Takeshi are no match for him, but with the help of Ogai and Gena, Takeshi manages to destroy his armor and they manage to kill him.

Gena who had received orders by CTAC, to take out Holly, decides not to follow them and just reports she had taken care of her. She then bid farewell with Takeshi and leaves, who still didn't knew who she was.

While deciding whether or not to solve Laurens Bancroft's murder, Takeshi has a vision of his sister and Quell, both asking him what he should do.

Takeshi later encounters Rei at a museum exhibit about Quell and the Envoys, posing as a young schoolgirl. Though she says a familiar line from their mother, he ultimately does not recognize her.

Reileen attends Bancroft's party, posing as another meth named Clarissa Severin. Her gift for Bancroft is a snake with the mind of a convicted serial killer.

As Hemingway, Reileen meets with Dimi the Twin, ordering him to leave Takeshi alone, though he adamantly refuses. Hemingway later meets with Takeshi (disguised as Tanaka) in the virtual world. Though Rei slowly begins to recognize her long-lost brother, the meeting is cut short when Dimi attacks the cafe Takeshi is visiting.

Realizing Dimi has gone against orders, Reileen travels to Panama Rose Fightdrome and single-handedly rescues Takeshi, killing many people in the process.

Rei takes Takeshi back to Head in the Clouds and nurses him back to health. Though Rei desires to put her brother in a new sleeve to save his life, Takeshi insists on remaining in Elias Ryker's sleeve as a promise to Kristin Ortega. Once recovered, Takeshi and Rei catch up on lost time.

After his chat with his sister Takeshi meets Ortega outside the prison and tells her to take out his sister. That night Ortega enters the vault and destroys Rei's DNA and all of her clones. Rei backs herself up into the girl and Ortega is captured with the last remaining clone needlecasting into Ortega's stack. Takeshi heals her wounds but realizes his sister is impersonating Ortega and sends Mister Leung after him.

Takeshi makes a clone of his own and breaks into Head in the Clouds. Takeshi injects the clone, Rei's clones, and all of the backups with Rawling and kills Reileen ending her reign of terror.

Reileen personifies the worst traits of a meth, and all the qualities that Quellcrist Falconer warned about. She is arrogant, manipulative and self-centered, with a massive ego and "love" for her brother that verges on the psychotic.

She believes she has made herself stronger and better by getting rid of things she sees as weak- mainly empathy, compassion and human emotions- things she believes got her mother killed. As a consequence, however, she is somewhat ignorant in certain matters and this blinds her to the consequences of her actions. She claims to love her brother but does not seem to grasp what love means and the bonds that it can form, as Takeshi had done with allies past and present.

She spent the past two centuries trying to exonerate her brother and free him, due to her love and bond between them, planning to clone his original body so they could live forever. However, her love for her brother is borderline incestuous, as she is envious of any woman Takeshi has an interest in (Quellcrist and Kirsten), and either had them eliminated (Quellcrist) or killed their families out of spite (Kirsten), seeing them as rivals for her brother's affection. It is heavily implied that her love transcends that of a normal sibling bond and is more close to a romantic and physical attraction, a trait that disturbs Takeshi. This "love" and her treatment of those she sees as rivals for Takeshi's affection drives him away from her- something she did not plan for.

She also displays some sadistic tendencies, as she resleeved Quellcrist Falconer, only to imprison her in a coffin on Harlan's World and torture her in Virtual reality for two centuries. She would visit Quell on a regular basis to gloat. She also took pleasure in toying with others, even in inhumane ways, eg. keeping "Janus" sleeved in a snake body, driving him to insanity and keeping him as a pet.

She appears to be highly intelligent, being able to plan and control complex situations from behind the scenes and to be able to manipulate many people. She appears to have a short temper and to take offense quickly.

Reileen is a young woman of mixed Japanese and European decent. 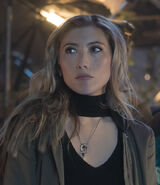