An unidentified woman was an inmate of the Alcatraz Prison in Bay City. A six year old girl named Cindy was resleeved into the woman's body, after the young girl was killed in a hit and run. This process was called "victim restitution". When the resleeved Cindy met her parents in the prison lobby, they were shocked. Her parents had expected a younger body closer to Cindy's age. They were told by a security guard that the woman's sleeve was free, if they didn't like Cindy's new body they could pay for an upgrade or put her back into storage. 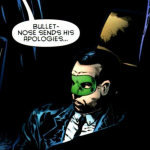